How to Use the Excel AVERAGEIF Function

In Excel, there’s an easy way to identify and find the average of numbers that satisfy a certain criterion. With the AVERAGEIF function, Excel looks within the specified range for a single condition and then finds the arithmetic mean of the cells that meet that condition.

The AVERAGEIF function has two required arguments and one optional argument.

Use this free Excel AVERAGEIF file to practice along with the tutorial.

For example, from the list of fruit prices below, we can ask Excel to extract only the cells that say “apples” in column A, and find their average price from column B. In this case, all three arguments are used, since the range does not contain the numbers being used to calculate the average price. 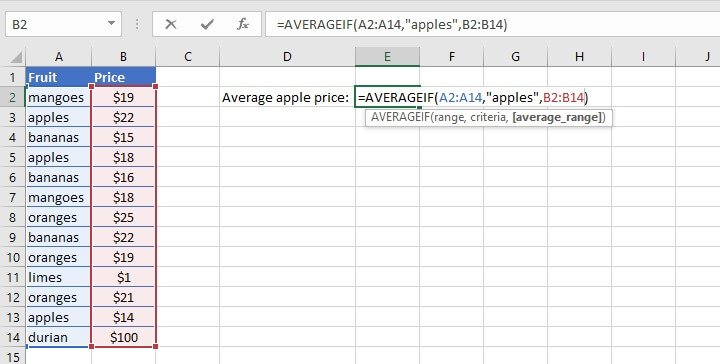 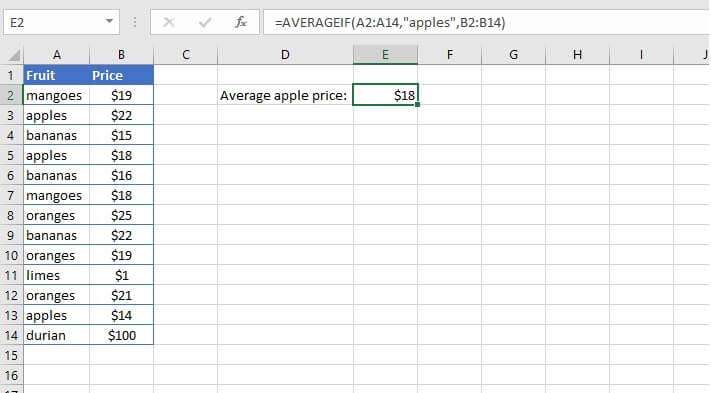 Note that the text value “apples” is placed within double quotes.

In cases where the range and average_range size or shape are different, Excel uses a combination of the first cell in average_range, plus the size and shape of the range, to determine the actual range of cells to be averaged. 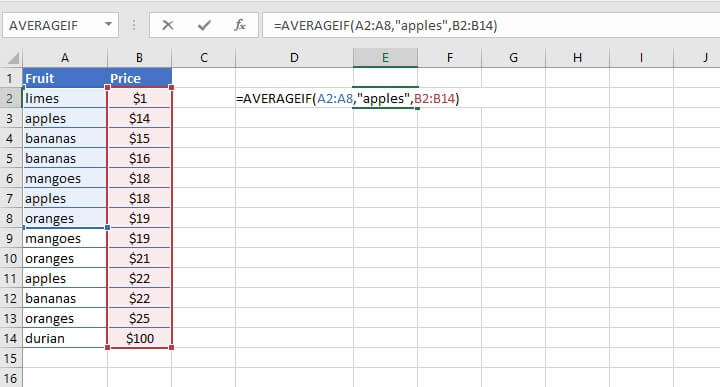 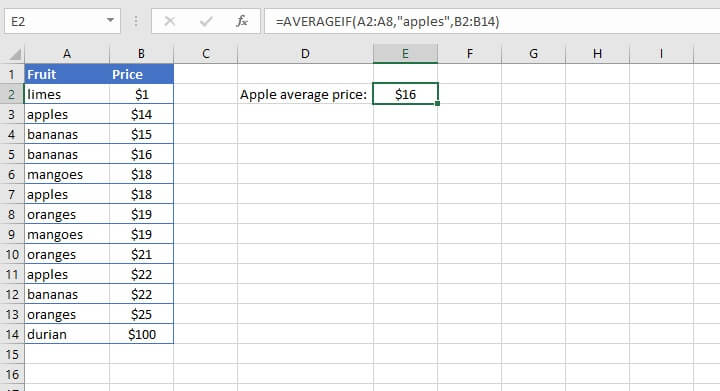 Though the average_range was stated as B2 to B14, only the cells in B2 to B8 were actually averaged, since those are the cells that corresponded with the A2 to A8 range.

The criteria in an AVERAGEIF function may also be in the form of a logical statement, using the standard logical mathematical operators (=, >, <). However, as shown with the text examples above, the criteria argument defaults to “is equal to” so there’s no need to enter the equal sign (=) when stating the “is equal to” criterion.

The following combinations of these operators are also used for other specific logical comparisons.

An example of a less than comparison is shown below. Note that the third (optional) argument is omitted. Therefore the cells in the range are used to calculate the average.

The formula above only takes into account and finds the average of the four highlighted values — 54, 49, 56, and 0. It ignores the “Sick” value in cell B6 since the AVERAGEIF function does not assign numeric values to text.

We can also use a logical operator in combination with a cell reference to establish a criteria for the AVERAGEIF function. The following example finds the average of all cells within the range B2 to H11, which are less than the value in cell J1.

As shown above, the text “Sick” in cell B6 was skipped when arriving at the average, so the only cells used in the calculation were C3, E3, F7, and D11.

Cells not equal to

To exclude cells that contain a certain value, the <> (is not equal to) operator should be used. For example:

By way of comparison, notice the result in the image below, where cell J2 uses the AVERAGE function instead.

In the above example, the AVERAGE function is used in cell J2, which means all values in the range B2 to H2 are used to calculate the range. Therefore, the zero value in cell D2 affects the outcome of the average.

The AVERAGE function ignores blank cells, so the AVERAGEIF function isn’t needed if we want to get the average of cells that are not blank. To prove this point, we created a complex AVERAGEIF formula by using the logical operator <> together with empty double quotes, to represent the criterion is not equal to an empty cell in the example below.

AVERAGEIF with OR logic

There may be times when we’d like to find the average of cells within a range that satisfies any one of multiple criteria (like “apples” or “oranges”). This scenario is fairly easy to resolve by incorporating OR logic.

AVERAGEIF with AND logic

Sometimes the cells we want to extract from a range are alike in some ways, but they aren’t identical. In other words, they are only a partial match. Wildcards provide a great solution for identifying these cells, and AVERAGEIF does work with wildcards.

We can find the average of all text in the range A2 to A14 that ends with “es” by placing an asterisk before “es” as our criteria. 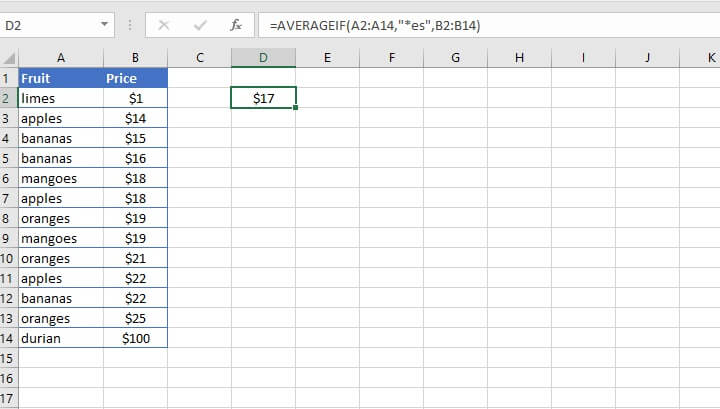 The result of the above criteria is that the average price of limes, apples, mangoes, and oranges is calculated and returned in cell D2.

Points to watch for

Ready to be an Excel pro? Check out the Microsoft Excel - Basic and Advanced course today.

Claudia is a content writer and course instructor at GoSkills. If she's not at work, she's probably tackling a genealogy project. 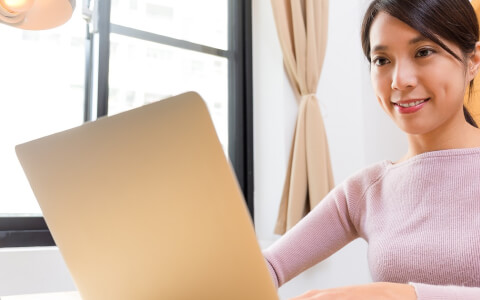 How to Concatenate in Excel

There are four ways to concatenate in Excel (the CONCATENATE Excel function, CONCAT, TEXTJOIN, and the & operator). Learn about them in this beginner's guide. 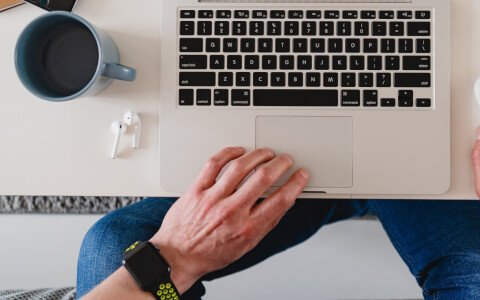 How to Use the Excel COUNTA Function

The Excel COUNTA function counts all cells with data. Learn all about it in this beginner's guide. 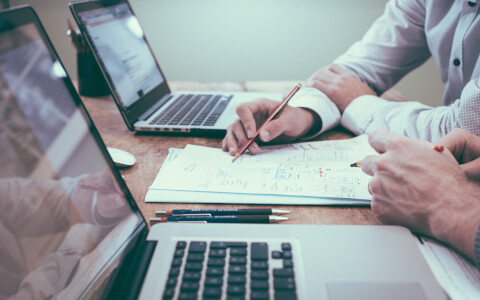 How to Use the COUNT Function in Excel

Excel is all about large quantities of data. Learn how to use the COUNT function in Excel to count your data in various ways.